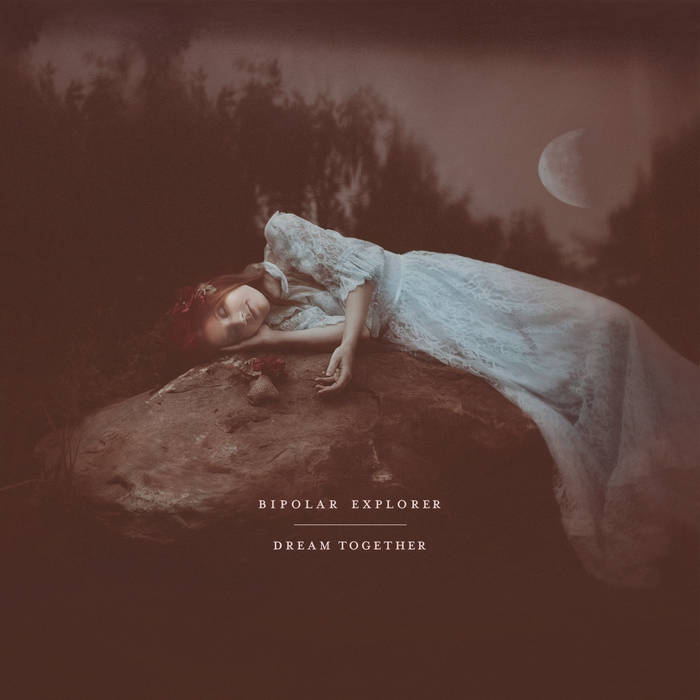 ABOUT THIS ALBUM: Their sixth album, NYC dreampop trio Bipolar Explorer follow up their critically acclaimed albums “Of Love and Loss” and “Angels” (Best Albums of the Year - Ground Control Magazine, 2013 and 2015, respectively) with this breathtaking new work.

Released on New Year’s Day 2017, DREAM TOGETHER found immediate praise from WFMU’s Liz Berg as “just a great album for winter” and USC filmmaker and author Alexandra Dennis-Renner writing on the day of its release “in light of a new year, I encourage everybody to snap up a copy of Bipolar Explorer's new album, "Dream Together", that dropped with the ball today. Every song on "Dream Together" is a reminder that the end of one thing is not necessarily the beginning of something new--not a hard reset--but the continuation of what was through the lens of what could be. What will be. And proof that there is always love, hope, and strength in that journey. There's something here for you and you are loved.”

Finding airplay on Irene Trudel's show ("beautiful, great drifty pop, full of sadness and wonder") as well as Joe McGasko's and the aforementioned Ms. Berg, all on WFMU, and charting at #18 on California's free-form KDVS in the first weeks after its release, DREAM TOGETHER was received glowingly in France in a review by Raphael Duprez for Indiemusic Magazine:

"New York’s Bipolar Explorer offers a new album, their sixth, Dream Together (Slugg Records) which is as much a reverie as a dream burning and crawling gently under our bare skins. In perpetual search for the discovery of the unknown, the trio delivers a work as simple as it is majestic and pure. The guitars charged with reverb and delay, voices and choruses distant but warm, all in an atmosphere as moist as light, like a refreshing breeze before the storm. Daring and emotionally naked, doubtless this record may undo some. But we must yield to the temptation, the inexorable attraction of these magical and nostalgic, deep and milky songs. Alternatingly dark ("Thirteen", “View”), angelic and aerial (“Dream 3”), painful and urgent (“She Hears You Calling”), catching and cathartic, the album closes with the ten-minute epic "To The Other Half Of The Sky” - loaded with palpable electricity as well as an ultimate tour de force in softness - the group relaxing its muscles and leaving notes hovering long after its ultimate resonances. Devilishly endearing, Dream Together offers that rare possibility for us to traverse vast lands, leaving so primordial a place for our imagination, all by means of sonics that are literally enveloping and vibrating. A LP that is drunk, slowly, to better quench thirst. A walk through the clouds, without worrying about the next day."

DREAM TOGETHER is available both as a digital download and as a limited-edition CD with a beautiful 20-page booklet including song lyrics, narrative poems and vintage photos in the style of a Victorian book of verses, written and conceived by frontman Michael Serafin-Wells and art directed by the New York School of Visual Arts’s Audun Grimstad.

ABOUT THE BAND: Their double-album, OF LOVE AND LOSS (2013) - "The most significantly stirring and addictive musical accomplishment we've come across in some time. Taut, emotional, urgent and altogether haunting” - and its follow-up, ANGELS (2015) - “Electrifying, what music fueled by raw love and emotions sounds like” - each a Critics Pick for Best Albums of the Year by Ground Control Magazine, Bipolar Explorer are an NYC-based dreampop, post-rock group founded by Summer Serafin (vocals) and former Uncle frontman Michael Serafin-Wells (lead guitar & vocals, bass and percussion), notable for intimate, electric live performances, unimpeachable songwriting, uncompromising DIY ethos and their playing without drums.

Recorded, mixed and produced by the band at The Shrine in New York’s Hell’s Kitchen, DREAM TOGETHER is the group’s sixth album overall and their second in just the span of a year.

Having begun work on a live performance art adaptation of their double-album, OF LOVE AND LOSS - first presented as a "concert performance" in Brooklyn in October 2015 and expected to premiere in a found, possibly sacred venue sometime early-2017 - Serafin-Wells says,“the idea of a female voice, a spoken word narrator, came to mind. To tell the story in tandem with the band, supported by film projections. And once I wrote the narrative voice for the live Of Love, that just started to seem a natural thing, making its way into ELECTRIC HYMNAL and DREAM TOGETHER. Ya know? In that way that things sort of cross-pollinate through multiple projects. We were listening a lot to Laurie Anderson’s “Heart of A Dog” at the time and we kinda thought… yeah.”

In artistic collaboration with several visual artist friends of the band, both "Of Love and Loss" and "Dream Together" are conceived for performance as live installation pieces, in intimate, non-traditional settings. Immersive and multi-media, this direction might well be seen as a natural outgrowth of the band’s perennial choice of performance setting - art galleries - and other non-traditional venues.

As Michael told Indiemusic’s Raphael Duprez in a feature about the band (February 2017): “All of this is entirely for her. I often say that our music, each album, is of, for and about her. It’s my way of telling people about her and talking to her myself. That’s the “for’ and “about” parts of the equation. And Summer remains an integral part of the band - not only as its inspiration but, because I have lots of her isolated vocals from other recording sessions - as her voice, both spoken and singing, graces each record. I’ll write songs and fly in her voice. Summer isn’t the main reason BPX goes on, she’s the only reason. She is the reason. And I think I can trust that I’m doing things for the right reason if I always know the reason for it is her. Not out of any ambition other than to honor and conjure her. She’s my conscience..."

Dream Together is conceived for and imagined as a live performance arts installation with a spoken word narration component and visuals as alluded to within this booklet. For inquiries, visual artist collaboration and bookings, contact the band via their website: www.bipolarexplorer.info

For Summer who filled my life with light and love and who is with me, I know. Not least of all for coming to me in dreams with several of these songs. In that magic place, between sleep and wake, I would quickly reach bedside to sing them into my phone before rising and figuring out the rest on guitar in the light of dawn. Little sweetheart, thank you. I know with all my soul that we are indeed “just a heartbeat apart”. With all my love forever...