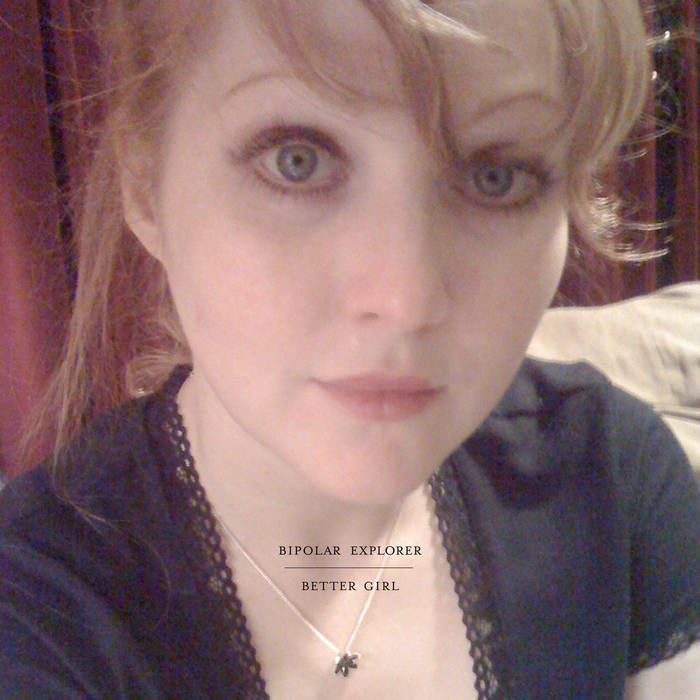 Six weeks after the release of their seventh album, SOMETIMES IN DREAMS - “Unforgettable & essential. A major record” (Indiemusic -France) - NYC shoegaze trio release this breathtaking cover of Best Coast's "Better Girl" for Valentines Day to honor their fallen bandmate, group co-founder, Michael's True Love, soulmate and partner, Summer Serafin, who passed away after a tragic accident in 2011. With love forever.

Recorded and mixed live, noisily and in a hurry at The Shrine - NYC. Produced by Bipolar Explorer.
Mastered by Scott Craggs, Old Colony - Boston.

Just six weeks ago, we released our seventh album, a 28-track double-album - SOMETIMES IN DREAMS. But, unable to restrain ourselves, today we release a new single on its very heels.

Immeasurably indebted and unbelievable flattered to (occasionally) being likened to bands like Low, Slowdive, and The Velvet Underground, who we revere, we’d like to say something about Bethany Consentino and her group - we love them.

Long story short as possible - when we were wrapping up work on OF LOVE AND LOSS, still very much shattered by grief, our art director gave us a mix tape, something put together by the great Since ’78. Entitled Adios Los Angeles, it was all around the theme of leaving, of all that’s lost and all we might hope to one day once again find.

The final track was Best Coast’s “Up All Night”, the kind of pop song so filled with the ache of longing and distance that I nearly fell apart listening the first time. And again. And again. I’d never heard the band before, so I got myself the album “Up All Night” came from (and, indeed, closes) - “The Only Place”.

As our band has moved deeper and deeper into post-rock terrain, it may seem a bit of an anomaly to hear how felled I was by Ms. Consentino and her sunny, bittersweet anthems - long-suffering friends are far more likely to hear me enthusing or indeed insisting on one more spin of “Metal Machine Music” at full volume - but felled I was.

This album, this song, came to me at the darkest of times, opening the wound of loss and longing even yet a bit deeper all in the service of helping me remember and keep moving, however hurting.

Our shoegazey version of this song, released today, on Valentines Day, is meant as a tribute both in thanks to its author and to our fallen bandmate herself, my love and partner. my soulmate, true love and best friend, Summer.

If Ms. Consentino herself comes across this, I hope she doesn’t roll her eyes too much. Because, in the immortal words of John Lydon, “we mean it, man.”

With love and faith…

ABOUT THE BAND (reviews):

"The most significantly stirring and addictive musical accomplishment we've come across in some time. Taut, emotional, urgent and altogether haunting” - Ground Control

ABOUT THE BAND (bio):

Their seventh album, SOMETIMES IN DREAMS (2018) hailed as "epic and affecting" by Surface Noise, their sixth album, DREAM TOGETHER (2017), praised by France’s Indiemusic as “magical and majestic - an ultimate tour-de-force”, their double-album, OF LOVE AND LOSS (2013) - "The most significantly stirring and addictive musical accomplishment we've come across in some time. Taut, emotional, urgent and altogether haunting” - and its follow-up, ANGELS (2015) - “Electrifying, what music fueled by raw love and emotions sounds like” - each a Critics Pick for Best Albums of the Year by Ground Control Magazine, Bipolar Explorer are an NYC-based dreampop, post-rock group founded by Summer Serafin (vocals) and Michael Serafin-Wells (lead guitar & vocals, bass and percussion), notable for intimate, electric live performances, unimpeachable songwriting, uncompromising DIY ethos and their playing without drums.

Featured on the legendary Irene Trudel's show on WFMU ("America's best radio station" - Rolling Stone) who calls their sound "beautiful, great drifty pop, filled with sadness and wonder”, the band follow up the New Year's Day 2018 release of their newest album, their seventh, a double-album, SOMETIMES IN DREAMS - "Unforgettable and essential. This is a major record" (Indiemusic -France) - with the release of this digital single, a breathtaking cover of Best Coast's "Better Girl" just six weeks later for Valentines Day.

Recorded, mixed and produced by the band at The Shrine in New York’s Hell’s Kitchen, "Better Girl" is the band's fourth single and SOMETIMES IN DREAMS is both the group’s seventh album overall and their third in just the span of eighteen months.

The interweaving of spoken word into the band’s work was explained by Serafin-Wells recently in conversation with USC filmmaker, Alexandra Dennis-Renner, who is making a documentary, "Sonic Prayer", about the band. Having begun work on the live performance arts installation piece that ultimately became the new double-album, Sometimes in Dreams, Serafin-Wells says,“the idea of a female voice, a spoken word narrator - like in a novel or off-camera in a film - came to mind. To tell the story in tandem with the band, supported by film projections in collaboration with a visual artist. And once I wrote the narrative voice for the that, it just started to seem a natural thing, making its way into “Electric Hymnal” and “Dream Together”. Ya know? In that way that things sort of cross-pollinate through multiple projects. We were listening a lot to Laurie Anderson’s “Heart of A Dog” at the time and we kinda thought… yeah.”

In artistic collaboration with several visual artist friends of the band, SOMETIMES IN DREAMS, DREAM TOGETHER and ELECTRIC HYMNAL are conceived for performance as live installation pieces, in intimate, non-traditional settings. Immersive and multi-media, this direction might well be seen as a natural outgrowth of the band’s perennial choice of performance setting - art galleries - and other non-traditional venues.

Forging an unique sound - described variously as shoegaze, dreampop, slowcore, post-rock and minimalist indie - well serves the new songs Serafin-Wells began writing in the aftermath of the tragic loss of the group's female vocalist, Michael's love and partner, Summer Serafin, who passed away after a tragic accident in 2011. She was just 31. At work at the time on a new record, the group eventually returned to those recordings, adding them to a handful of newly written songs post-tragedy and re-conceiving the album as both a testament and tribute to Ms. Serafin – muse, collaborator and True Love - yielding a double-album, OF LOVE AND LOSS, released to great acclaim in October 2012.

As Michael told Indiemusic’s Raphael Duprez in a feature about the band (February 2017): “All of this is entirely for her. I often say that our music, each album, is of, for and about her. It’s my way of telling people about her and talking to her myself. That’s the “for’ and “about” parts of the equation. And Summer remains an integral part of the band - not only as its inspiration but, because I have lots of her isolated vocals from other recording sessions - as her voice, both spoken and singing, graces each record. I’ll write songs and fly in her voice. Summer isn’t the main reason BPX goes on, she’s the only reason. She is the reason. And I think I can trust that I’m doing things for the right reason if I always know the reason for it is her. Not out of any ambition other than to honor and conjure her. She’s my conscience."

Recorded and mixed live, noisily and in a hurry at The Shrine - NYC. Produced by Bipolar Explorer.