Til Morning Is Nigh: A Dream of Christmas 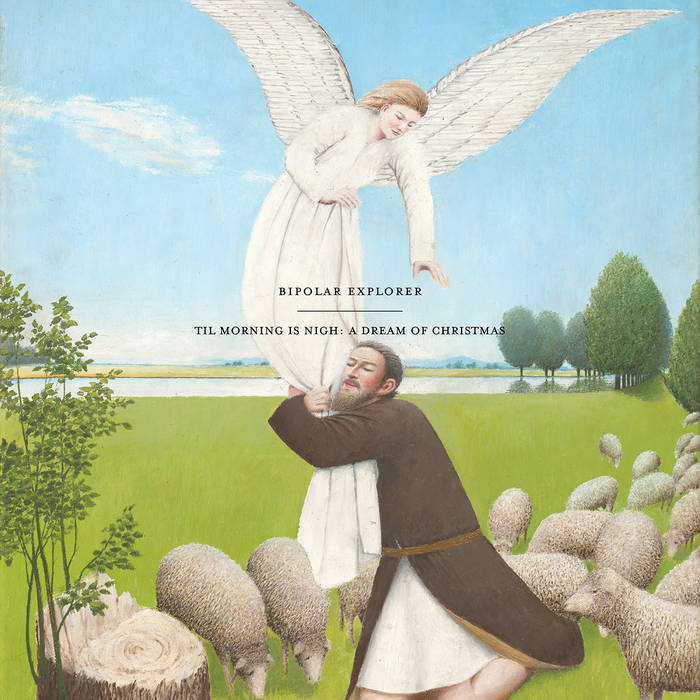 REVIEWS:
"Ethereal music that sends the listener up towards the heavens to sit aloft on the clouds above. A truly ascendant album to be listened to any time of year."
-Carol Crow, WFMU

"Eleven months have thus passed after their moving double album, “Sometimes In Dreams”. And yet this has not been enough for Bipolar
Explorer to not come back and enchant us yet again for this end of the year, this time with a more conceptual album titled “Til Morning Is Nigh: A Dream Of Christmas”.

With Christmas season approaching (and it's become more than a
custom), artists and bands have decided to follow the trend so as to remind us of the festive aspect of the event, and the New York duo has gotten on board too but with an extra touch of creativity. With the help of a French newcomer named Sylvia Solanas who quotes several passages of the Old Testament on short tracks ("Before We Could Be
Found", "The Faithful Delivered", "Even Forever"...), Bipolar Explorer
explores (no pun intended) the Christmas tradition with their luminous and enchanting dreampop/shoegaze through tracks still as minimalist
but also dreamlike with among others "Bethlehem",
"Oh That We Were There" and "Mille Anges Divins".

Michael Serafin-Wells, Summer Serafin and their French guest give us a new glimpse of Christmas with solemn compositions such as "Gabriel", "Midwinter", as well as "Angel Frequency".

“Til Morning Is Nigh: A Dream Of Christmas” is quite a bold tale divided into 23 musical chapters. If you're looking for Christmas gift ideas, Bipolar Explorer is more than an option...”


MORE ABOUT THIS ALBUM:
NYC dreampop trio follow up their celebrated 7th album, SOMETIMES IN DREAMS -“unforgettable and essential” (Indiemusic - France) - with this 23-track soundscape of shoegaze, dreampop and spoken word underscored by post-rock guitar.

Featuring both new compositions and new instrumentation (organ, synth, melodica). And new voices - joining band co-founders Summer and Michael is Sylvia Solanas. Originally from the south of France, Ms Solanas voices spoken word in French on the new album and is a co-founder (with Michael) of the band's brand new sibling in dreampop, Tremosphere, who themselves released a debut album, "Interiors" (also on Slugg Records) in February 2019.

“So… we had already had plans to write and record this album, our eighth, early this year and had the good fortune to be gifted the rights (by The Slovak National Gallery) to the breathtaking painting by the late L’udovit Kochol that graces its cover. But before we could begin in earnest, Michael was hit by a car on the day before his birthday in April, awaking in the ER with serious injuries. Then, two weeks later as he was initially released, collapsed on the sidewalk outside of the hospital, in Sylvia’s arms. Terrified, she screamed for help and texted Summer’s dad, a MD, who replied immediately in all caps: “pulmonary embolism”. Rushed back into Trauma, his heart stopped for a full ten minutes. Usually fatal, it's something of a miracle he is still with us - returned and guarded by angels on both sides of the divide. This record, a dream bridging that very chasm, echoes those moments between worlds, like a late night broadcast from a distant radio transmitter drifting to us as we lay half asleep in the midwinter twilight. The album’s bilingual spoken word mirrors this, too - angels (Michael’s and our own), both celestial and earthly, enveloping us with love and protection”

Recorded live, noisily and in a hurry at The Shrine - NYC.
All songs by Michael Serafin-Wells and/or traditional arranged by Serafin-Wells. c. 2018 Thirteen November Music (ASCAP),
Produced by Bipolar Explorer.

For Summer, with love forever. A thousand divine angels watch, bless and keep you.

On November 23, 2018, the band released its 8th album, Til Morning is Nigh - hailed as "dreamlike, luminous and enchanting" by France's Les Oreilles Curieuses - the follow-up to the band’s celebrated seventh album, Sometimes in Dreams - "Unforgettable and essential. This is a major record.” (Indiemusic -France), which reached the #19 position of WFMU’s album charts in May 2018 and entered the top 200 of the North America College and Community Radio (NACC) listings. In March 2019, the band made its London radio debut, featured over consecutive weeks on Resonance FM and in July, their Dutch radio debut on Radio Hoogeveen’s post-rock show, De Mist.

Recorded, mixed and produced by the band at The Shrine in New York’s Hell’s Kitchen, Til Morning is the band's eighth album overall and their fourth in just the span of twenty-eight months. The group quickly followed up with both a limited release single, "The Dark Outside, The Light Within” - composed and recorded for London's experimental radio show "The Dark Outside” and premiered in a special event broadcast on June 20, 2019 on London's 87.7fm - and a six-part mini documentary about the making of Til Morning, that premiered episodically August-September 2019 on the band’s YouTube channel. (watch here: www.youtube.com/playlist?list=PLc2NsHH1y5VY8Fq1lsqlcocNDLY4VrgCt)

The signature interweaving of spoken word into the band’s work is described by the UK’s Norman Records as “a cross between Slowdive and Laurie Anderson - a late night radio transmission drifting to us, half asleep in bed”.

Recorded live, noisily and in a hurry at The Shrine - NYC.
All songs by Michael Serafin-Wells and/or traditional arranged by Serafin-Wells. c. 2018 Thirteen November Music (ASCAP),
Produced by Bipolar Explorer.

For Summer, with love forever. A thousand divine angels watch, bless and keep you.

WATCH DOCUMENTARY - "The Making of 'Til Morning is Nigh" - here: www.youtube.com/playlist?list=PLc2NsHH1y5VY8Fq1lsqlcocNDLY4VrgCt